Deep in the heart of Texas

This blog has been very very quiet lately. It will probably happen again. I've started to paint some Texans for a little scene from 1835-36 sometime. Don't know if I will put them near the Alamo or somewhere else. I have some cavalry to paint to. These fellows are from Imex Alamo Defenders, Strelets Boers, Airfix Waterloo Prussians and various Airfix WWI-sets. The cavalry will be Hat's Napoleonic French Lancers and Hat's Napoleonic French Dragoons. Maybe some Mexican infantry too (probably made from ESCI and Italeri French Napoleonic Infantry), haven't decided on that yet. There is a lot more to do on these figures! 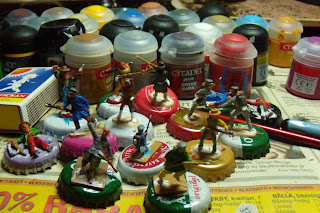